Several students under the VCDMA major, digital cinema, and time-based media concentrations, as well as others in Theatre Arts and Communications all successfully worked as production interns under various departments for (4) four short films that will air on BET+HER this weekend on July 25 at 9 PM. Also, another VCDMA film students worked also produced by Tressa Smallwood titled, ALL IN recently aired on 7/18/20 and also on BET+HER.

These powerful films are part of a series titled THE COUCH and are part of the network's campaign to focus on mental health awareness month. They are all directed and produced by women and the executive producer is BSU alumna, Tressa Azarel Smallwood, through her studio MEGAMIND MEDIA. These films were directed by Kim Fields, Victoria Rowell, Vanessa Bell Calloway, and Sheryl Lee Ralph. Hopefully, we can share this news with the campus community? 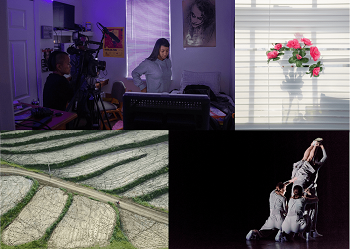 The online exhibition includes graduating seniors from the fine arts, studio art concentration, and visual communication and digital media arts (VCDMA) programs in the Department of Fine & Performing Arts. According to gallery coordinator Janell B. Pryor, “The artworks on this digital platform are visual reflections of self-discovery, affirmation, self-care, and cultural enlightenment. Interpretations of the students’ personal experiences and observations are expressed through film, advertising design, fashion, digital media arts, and photography.”

Mia Joseph (VCDMA, Animation & Motion Graphics, '19) represented Bowie State well as an animation production intern with Sony Picture Animation team this summer.  Additionally, as part of the HBCU in LA Internship Program, Mia served as the Co-Director of our inaugural HBCU in LA Student Film Project.  She along with 30 HBCU Scholars visited Los Angeles this summer.  The students received mentorship from industry leaders and professionals during the making of the film. Panavision and the Cinematographer’s Union provided top of the line equipment and crew for the project. HBCU in LA are proud to be the first program to showcase aspiring HBCU student writers, directors, actors and below-the-line talent to the industry! Below is a behind-the-scenes video of the inaugural HBCU Student Film Project. Never before has an HBCU student produced film been showcased to the industry.

Check out the making of HBCU in LA student film

Get more info on the HBCU in LA program