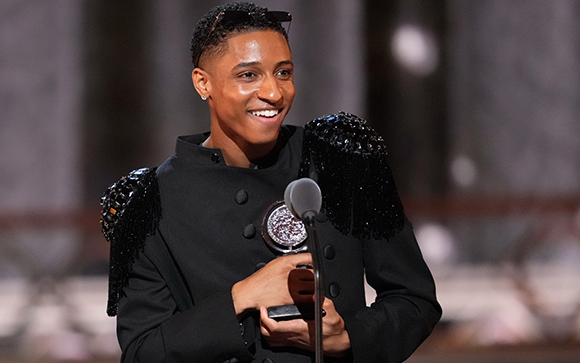 (BOWIE, Md.) – Bowie State University’s (BSU) Myles Frost has received Broadway’s highest honor, a Tony Award, for Best Performance by an Actor in a Leading Role in a Musical starring as Michael Jackson in MJ: The Musical. Faculty, students, and administrators at the university are celebrating his history making accomplishment.

“We are absolutely thrilled that Myles Frost has won a Tony Award for his portrayal of music icon Michael Jackson in Broadway’s MJ: The Musical,” said Dr. Aminta Breaux, President of Bowie State University. “Myles is the youngest HBCU student to win a Tony. I believe the best is yet to come,” she said.

Frost is also the youngest actor to win a Tony Award solo in his category. He was a 22 year-old junior and budding music technology major at Bowie State before being selected in 2021 for the starring role on Broadway after the musical’s producers saw a high school YouTube video of him performing Jackson’s hit “Billie Jean.”

“Words can’t express how proud the entire Bowie State University family is to know that Myles has won a Tony Award,” said Breaux. “He exemplifies excellence which is one the university’s core values, and he’ll be a role model for other Bowie State students for generations. There seems to be no limits to his artistic talent, and BSU looks forward to supporting him throughout his career.”