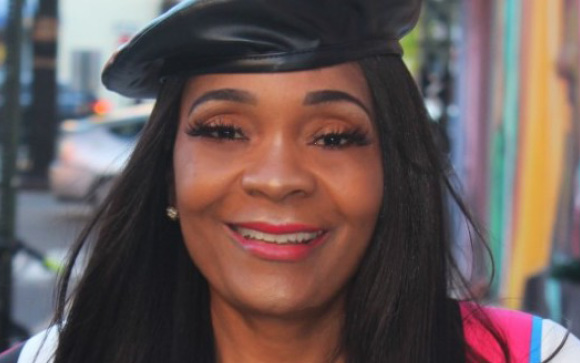 (BOWIE, Md.) – Queen and MC Sha-Rock, considered by musical artists and scholars to be the first female MC, rapper and hip-hop performer, has joined Bowie State University's Visual Communication & Digital Media Arts (VCDMA) program in the Department of Fine and Performing Arts as the Resident MC, Hip-Hop Historian, and adjunct professor. MC Sha-Rock will teach courses and work with students pursuing a minor in Hip-Hop Studies and Visual Culture.

Sha-Rock is recognized as the first female emcee to appear on vinyl records from its genesis in the late 1970s and began her career as a local break dancer in the Bronx. She was known as the "Mother of the Mic" within the hip hop community acknowledging her role as a major female rap performer. Sha-Rock was a member of Funky 4+1 from the South Bronx, the first hip hop group to appear on national television.

"We believe Sha-Rock will make major contributions to the VCDMA program, especially working with our students on honing their material and teaching them how to constantly strive to improve whether performing, producing in the studio, or writing hip hop music," said Professor Tewodross M. Williams, chair of the Department of Fine and Performing Arts. "She is undoubtedly a trailblazer who is known internationally for her work, and to have her part of our program and the Bowie State family is fantastic."

Bowie State University is the only institution of higher learning in Maryland to offer a Hip Hop Studies & Visual Culture minor degree. The interdisciplinary degree program encourages students to develop creative projects and collaborative research across the disciplines including arts and humanities, media, history, language, and others. Sha-Rock says the opportunity to work with aspiring hip hop artists while they're pursuing college degrees is very important.

"It is critical that students understand the history of hip hop and how it became a music genre,” said Sha-Rock. “It has played a central role in the evolution of the music industry and popular culture with commercials, movies, plays, books, fashion, and other facets of everyday life impacted by hip hop. My goal is to help the students at the university know what hip hop is today, what it was, and what it is going to be.”

Sha-Rock was born in Wilmington, North Carolina and grew up in the Bronx, New York. Hip Hop artists MC Lyte and DMC of Run-DMC have stated that Sha Rock's style influenced them as they began their careers.