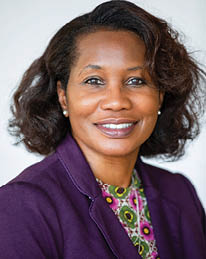 Department of History and Government

Karen Cook Bell is Associate Professor of History and the Wilson H. Elkins Endowed Professor. Her areas of specialization include slavery, the Civil War and Reconstruction, and women’s history. Her scholarship has appeared in the Journal of African American History; Georgia Historical Quarterly; Passport; U.S. West-Africa: Interaction and Relations (2008); Before Obama: A Reappraisal of Black Reconstruction Era Politicians (2012); Converging Identities: Blackness in the Contemporary Diaspora (2013); and Slavery and Freedom in Savannah (2014).  She has published Claiming Freedom: Race, Kinship, and Land in Nineteenth Century Georgia (University of South Carolina Press, 2018), which won the Georgia Board of Regents Excellence in Research Award.  Her current book, Running from Bondage: Enslaved Women and Their Remarkable Fight for Freedom in Revolutionary America, is published with Cambridge University Press and was a finalist for the Pauli Murray Book Prize for Best Book in African American Intellectual History. She is editor of Southern Black Women’s Struggle for Freedom during the Civil War and Reconstruction which is under contract with Cambridge University Press.  Her writings have also appeared in the Washington Post and Ms. Magazine. She is a contributor for Black Perspectives, the blog of the African American Intellectual History Society.  She is a former AAUW Dissertation Fellow.