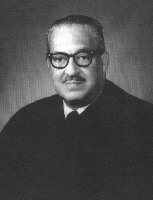 Born in Baltimore, Maryland on July 2, 1908, Thurgood Marshall was the grandson of a slave. His father, William Marshall, instilled in him from youth an appreciation for the United States Constitution and the rule of law. After completing high school in 1925, Thurgood followed his brother, William Aubrey Marshall, at the historically black Lincoln University in Chester County, Pennsylvania. His classmates at Lincoln included a distinguished group of future Black leaders such as the poet and author Langston Hughes, the future President of Ghana, Kwame Nkrumah, and musician Cab Calloway. Just before graduation, he married his first wife, Vivian "Buster" Burey. Their twenty-five year marriage ended with her death from cancer in 1955.

In 1930, he applied to the University of Maryland Law School, but was denied admission because he was black. This was an event that was to haunt him and direct his future professional life. Thurgood sought admission and was accepted at the Howard University Law School that same year and came under the immediate influence of the dynamic new dean, Charles Hamilton Houston, who instilled in all of his students the desire to apply the tenets of the Constitution to all Americans. Paramount in Houston's outlook was the need to overturn the 1898 Supreme Court ruling, Plessy v. Ferguson which established the legal doctrine called, "separate but equal." Marshall's first major court case came in 1933 when he successfully sued the University of Maryland to admit a young African American Amherst University graduate named Donald Gaines Murray. Applauding Marshall's victory, author H.L. Mencken wrote that the decision of denial by the University of Maryland Law School was "brutal and absurd," and they should not object to the "presence among them of a self-respecting and ambitious young Afro-American well prepared for his studies by four years of hard work in a class A college."

Thurgood Marshall followed his Howard University mentor, Charles Hamilton Houston to New York and later became Chief Counsel for the National Association for the Advancement of Colored People (NAACP). During this period, Mr. Marshall was asked by the United Nations and the United Kingdom to help draft the constitutions of the emerging African nations of Ghana and what is now Tanzania. It was felt that the person who so successfully fought for the rights of America's oppressed minority would be the perfect person to ensure the rights of the White citizens in these two former European colonies. After amassing an impressive record of Supreme Court challenges to state-sponsored discrimination, including the landmark Brown v. Board decision in 1954, President John F. Kennedy appointed Thurgood Marshall to the U.S. Court of Appeals for the Second Circuit. In this capacity, he wrote over 150 decisions including support for the rights of immigrants, limiting government intrusion in cases involving illegal search and seizure, double jeopardy, and right to privacy issues. Biographers Michael Davis and Hunter Clark note that, "none of his (Marshall's) 98 majority decisions was ever reversed by the Supreme Court." In 1965 President Lyndon Johnson appointed Judge Marshall to the office of U.S. Solicitor General. Before his subsequent nomination to the United States Supreme Court in 1967, Thurgood Marshall won 14 of the 19 cases he argued before the Supreme Court on behalf of the government. Indeed, Thurgood Marshall represented and won more cases before the United States Supreme Court than any other American.

Until his retirement from the highest court in the land, Justice Marshall established a record for supporting the voiceless American. Having honed his skills since the case against the University of Maryland, he developed a profound sensitivity to injustice by way of the crucible of racial discrimination in this country. As an Associate Supreme Court Justice, Thurgood Marshall leaves a legacy that expands that early sensitivity to include all of America's voiceless. Justice Marshall died on January 24, 1993.

Provided by A DEEPER SHADE OF BLACK

1934 - Begins to work for Baltimore branch of NAACP

1951 - Visits South Korea and Japan to investigate charges of racism in U.S. armed forces. He reported that the general practice was one of "rigid segregation".

1954 - Wins Brown v. Board of Education of Topeka, landmark case that demolishes legal basis for segregation in America

1991 - Retires from the Supreme Court