Making the World a Safer Place 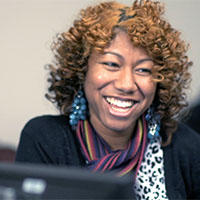 For Gema (’14) there is no higher calling than becoming an ethical hacker, trained to detect and repair weaknesses in the nation’s data security systems. She began her college career on another path, but later found the computer technology program at Bowie State could take her where she really wants to go.

After graduation, she landed her first job as a member of the computer security team of a national agency. She is using the skills she learned at Bowie State to develop mobile and web applications to test public safety communications.

Gema had transferred to Bowie State from another university to pursue her passion for computers. At Bowie State, she found a program where she could be hands-on with computer systems and study network security.

"I want to be a cryptologist, possibly with the National Security Agency, to decipher threatening messages and secure our national networks,” she said. “I want to be part of the team keeping our country safe."

As a member of Bowie’s Cybersecurity Team and the Women in Computing Club, Gema says she found the support to grow in her dream profession.

"At Bowie there is a lot more personal interaction and one-to-one time with professors than at my first school,” she said. “And the students are more willing to help each other; we’re all learning together."