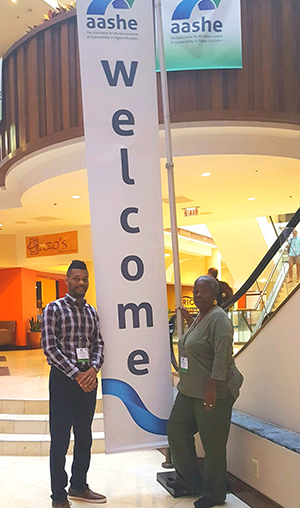 San Antonio, Texas, the site of ‘The Alamo’, home of the NBA team, the Spurs, and the seventh largest city in the U.S., was also home to the 2017 Annual AASHE (Association for the Advancement of Sustainability in Higher Education) Conference & Expo, with a theme of “Stronger in Solidarity”.  The theme focused on how the campus sustainability community can break down walls, build bridges, and continue to make progress toward a healthy and equitable future for all. All sessions were held in the LEED Silver Henry B. Gonzalez Convention Center & nearby downtown hotels.

The opening keynote speaker was Dr. Katharine Hayhoe, an accomplished atmospheric scientist and professor and director of the Climate Science Center at Texas Tech University.  She was named as one of TIME’s 100 Most Influential People.  The closing keynote speaker, Dr. Heather Hackman, is the founder of Hackman Consulting Group and has published in the area of social justice education theory and racism in health care.  She is currently working on a book examining the issue of race, racism, and whiteness in education.

Next year’s conference will be in Pittsburgh, Pennsylvania after pulling out of the originally planned 2018 St. Louis, Missouri location due to discriminatory legislation recently passed and the recent NAACP issuance of a travel advisory for the State of Missouri.

View photos from the 2017 event here