Check out the latest news and updates on the Center for Natural Sciences, Mathematics and Nursing.

Roland Martin sits down with BSU's Dr. Tyesha Burks to discuss her extensive research on the aging process and her journey to becoming a scientist. Watch the entire interview. 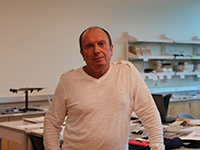 A Bowie State University physics professor and researcher, along with a recent BSU graduate, has received the university's first U.S. patent for a silent wind turbine that improves the performance over similar devices, can operate with low wind speeds and is small enough to power a single home.

Assistant Professor Mikhail Goloubev developed a unique design with two sets of three horizontal blades, which can harness the power of winds blowing in multiple directions and convert it into energy. More traditional wind turbines may house horizontal blades in a vertical shaft, which may need to be manually adjusted for optimal use under those conditions. Dr. Goloubev’s wind turbine does not include a shaft.

A Bowie State University biology student paired with a faculty mentor for a summer-long research experience took second place for her oral presentation at the Louis Stokes Alliance for Minority Participation Research Symposium for the Washington, Baltimore, and Hampton Roads region.

Senior Laureen Daniel competed against 13 students from six other historically black colleges and universities in the symposium. She worked with Assistant Professor Tyesha Burks to uncover the effects of the aging process on skeletal muscle atrophy, or sarcopenia, by investigating the changes underlying atrophy in adult male mice. Dr. Burks’s work on sarcopenia has earned her honors as a 2017 Emerging Scholar by Diverse: Issues in Higher Education.

Bowie State University is beginning to make major strides in drug discovery research. Not only is this raising the profile of Bowie State, but it is also helping Maryland continue to become a national player in the biotechnology industry. The faculty's work in the university’s new state-of-the-art Center for Natural Sciences, Mathematics and Nursing ranges from pancreatic cancer intervention to researching cures for rare genetic diseases.

Bowie State University continues to rank as one of Maryland’s top five institutions graduating African-Americans with bachelor’s degrees in science and technology fields, according to the 2017 Top 100 Producers of Minority Degrees rankings published by Diverse: Issues in Higher Education.